Curators
FREE Nigerian Business Directory
✅ NEW - get your business listed and your information shared across social media.
Ad
A Federal High Court in Maiduguri on Thursday jailed two local government officials in Borno State to one year in prison and N1m fine each for misappropriating 180 bags of rice meant for Internally Displaced Persons. 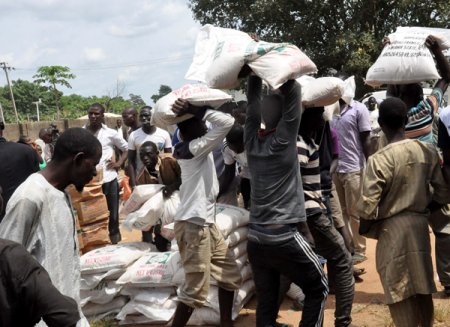 The convicts are Bulama Zangebe, a councillor and Modu Bulama, a storekeeper, both with Mafa Local Government Council of Borno State.

They were arraigned by the Economic and Financial Crimes Commission on a two-count bordering on criminal conspiracy and criminal misappropriation.

According to the charge sheet, the two colluded with one Shettima Maina, a former chairman of the local government, to commit the criminal act.

Maina, who was the first defendant, was declared “at large” throughout the hearing of the case.

He was said to be in custody of the military, for allegedly hoarding a wanted Boko Haram kingpin in his house.

Zangebe and Bulama were also convicted for converting N1.4m, being proceeds of the sale of the rice stolen from the IDP camp, into their personal use.

The convicts equally converted another N585,000, being the proceeds of the sale of yet another 65 bags of rice stolen from the camp.

The Presiding Judge, Justice Fadawu Umar, said that the two were found guilty of the two-count brought against them by the EFCC.

The judge said that for the first count, the convicts committed a crime punishable under sections 96 and 97 of the Penal Code Cap 345 of northern states of Nigeria and thereby sentenced to one year in prison and a fine of N1m.

“For the second charge, they committed a crime punishable under sections 308 and 309 of Penal Code Law Cap 345, Laws of Northern States of Nigeria, and are thereby sentenced to one year in prison and a fine of N1m.’’

The judge said the convicts were to serve the sentences concurrently.

This is the first conviction secured by the Maiduguri office of the EFCC.