Metro Borno: Two Suicide Bombers Killed, One Blows Self Up

Curators
FREE Nigerian Business Directory
✅ NEW - get your business listed and your information shared across social media.
Ad
Operatives of the Civilian Joint Task Force, CJTF, on Monday morning killed two female suicide bombers while the third blew herself up in Maiduguri, the Borno State capital. 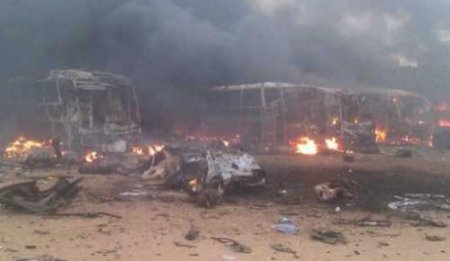 The female bombers, attempted to enter the city through Mamanti village in Jere Local Government Area at about 5.10 a.m, but were shot dead before detonating the explosive devices strapped to their bodies.

In a statement by the State Police Commissioner, Damian Chukwu, one of the female suicide bombers, however, blew herself up.

The statement reads, “Today at about 05:10hrs, three female suicide bombers attempted to enter Mamanti village Jere Local Government. They were intercepted by Civilian JTF. In the process, one of the bombers detonated IED strapped to her body killing herself alone.

“The other two tried to escape but were shot dead by security personnel on duty.EOD mine drafted to the scene to sanitize and render the area safe.”
J

may they rest in hell
Y

So Boko Haram is still in the business of manufacturing bombs and actively recruiting new members? The same defeated Boko Haram.
J

rip to the casualties
D

Is this another terror group or the same defeated boko haram?
J

Brutai and co have questions to answer

Is it not the said defeated boko haram be this?
Last edited by a moderator: Apr 24, 2017
R

Hell fire is theirs
M

If that is the way police are doing Boko Haram could have been think of the pass , when you arrest and take for investigation or interogation is story to hear , so l give kudos to CJTF