Femi Adesina, President's media aide said, Mr. Buhari stated this when he spoke on Thursday while receiving the outgoing Ambassador of the Royal Embassy of Saudi Arabia, Fahad Bin Abdullah Sefyan, in a farewell audience at State House, Abuja.

He said the relationship between Nigeria and Saudi Arabia was a mutually beneficial one, which should grow stronger in the years to come, President Muhammadu Buhari has said. 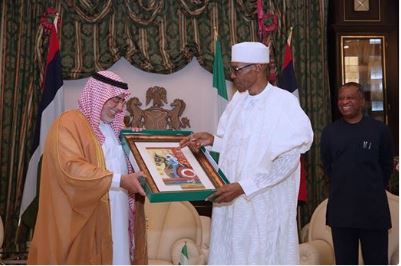 The President observed that the relationship between the countries was strong, adding that apart from visiting Mecca and Medina for religious reasons, a lot of Nigerians were in Saudi Arabian universities.

Noting that the last farming season was quite good, and that the Nigerian economy was gradually reviving, Buhari said the two countries would have more areas to collaborate in future.

“I quite appreciate the relationship between the two countries,” the President stressed.

Ambassador Sefyan, who spent 20 months on tour of duty, said he loved it in Nigeria, and would have wanted to stay for longer, if not that he was now due for retirement.