President Muhammadu Buhari and some of his top aides on Friday secretly informed that Governor Nasir El-Rufai of Kaduna State the president intends to run again as the candidate of the All Progressives Congress (APC) in 2019.

A senior Presidency source told Sahara Reporters that the decision to inform Mr. El-Rufai was taken because the governor was being touted as Mr. Buhari’s replacement in the event that the president cannot run for a second term in 2019 due to ill health.

During yesterday's meeting, President Buhari and his close associates asked Mr. El-Rufai to take up the role of honorary adviser to the presidential campaign which they said had already kicked off subtly through a series of propaganda initiatives since President Buhari returned from a prolonged medical treatment in London for an undisclosed illness. 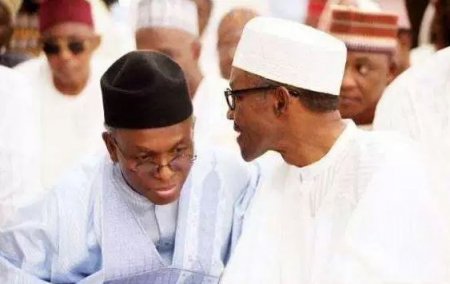 President Buhari and his team also asked Mr. El-Rufai to prepare for a second term as governor so as to strengthen his credentials to run for the Presidency in 2023, a projection that is unlikely considering that the Presidency would likely be zoned to another geographical zone by the party.

When Mr. El-Rufai emerged from the meeting with President Buhari, he took a swipe at the Minister of Women Affairs, Hajia Jumai AlHassan, who recently openly declared her intention to back former Vice President Abubakar Atiku for the Presidency in 2019, even if Mr. Buhari was in the race. Mr. El-Rufai told reporters that he had warned President Buhari against appointing Ms. AlHassan as a minister .