Former President Goodluck Jonathan said in Geneva yesterday, that the current administration is prosecuting the war against insurgency with the arms which were procured under his government.

Jonathan told France 24, that insurgency caught the country unaware but his government laid a solid foundation for terrorism to be defeated.

“The new government is working hard and I believe they are still using the equipment we procured.” 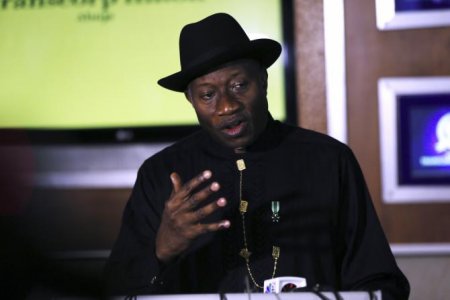 "Though the budget is still being debated, no new equipment has been bought, so even those equipment the president is using to prosecute the war against Boko Haram are those equipment we procured,” he said.

“When Boko Haram started in Nigeria, we had no terror experience. Yes we had armed robbery and other common crimes, but terrorism was different because the people involved were not afraid to die.

How to sub without subbing *crying*
P

How to talk without moving lips *laughing*
A

RemmyAlex said:
How to talk without moving lips *laughing*
Click to expand...

How to look without seeing *sleeping*
E

Can to you come to nigeria, and tell us? Geneva is your country? Nonsense

elrufai said:
Can to you come to nigeria, and tell us? Geneva is your country? Nonsense
Click to expand...

He's not coming back.

What if Nigeria dissolve the Senates and house of assembly pending the time of our Economy stable...
P

gresnTAM said:
What if Nigeria dissolve the Senates and house of assembly pending the time of our Economy stable...
Click to expand...

elrufai said:
Can to you come to nigeria, and tell us? Geneva is your country? Nonsense
Click to expand...

Probably best to address the claims he has made. Is the war being fought with the weapons the last administration did NOT buy?
A

Very very true! because Buhari has not and not to talk of buying of equipments since he took over government. Why I am accepting this statement is because the President can not procure war equipments with out the approval of the national Assembly, irrespective of the fact that we are in an Authoritarian government Under Buhari's watch