For Sale - One Bedroom Executive Flat - Lagos (NGN37m)
✅ NEW - car park, swimming pool, 24 hours light/security and more.
Ad
Mr. Wahab Junaid is a self-styled politician who has been caught by the Police Task Force on Anti-Pipeline Vandalism for vandalizing an NNPC pipeline in the Obafemi/Owode section of Ogun State.

Mr. Junaid has confessed to the crime, adding that he did it to raise money to contest in the 2015 general elections.

ACP Friday Ibadin, officer-in-charge of the task force has said Junaid (or 'doctor' as he's better known) is one of the most-wanted vandals and that he was arrested at Ifote village in the local council.

He has had three priors, discharged and acquitted each time. 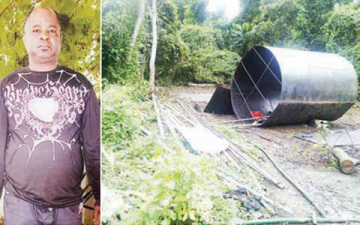