Curators
FREE Nigerian Business Directory
✅ NEW - get your business listed and your information shared across social media.
Ad
No fewer than 20 players of the Rovers football club of Calabar, on Friday besieged the gate leading to the office Cross River State Governor Ben Ayade, appealing for the payment of their two years salary arrears. 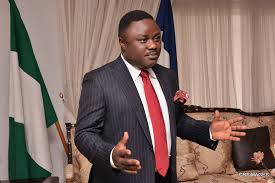 The footballers, who displayed various placards to express their predicament, urged the governor to urgently come to their aid.

“Your excellency, we greet you in solidarity. We the footballers of Calabar Rovers FC, also known as Ayade Boys’, are asking for our entitlements for two years. Thank you sir”, one of the placards read.

Though, they were denied access into the premises, the players insisted to see the governor until the commissioner for Youth and Sports Development in the state, Mr. Atsu Okang, eventually came to address them.

According to the lead protester, every attempt to draw the governor’s attention towards their plight proved abortive, over the past one year.