Sports Calabar Viewing Centre Tragedy: How It All Happened

Curators
FREE Nigerian Business Directory
✅ NEW - get your business listed and your information shared across social media.
Ad
It was something football lovers in Nyaghassang Community in Calabar Municipality of Cross River State had done hundreds of times before – watching football matches at a popular viewing centre along Access High School Road. 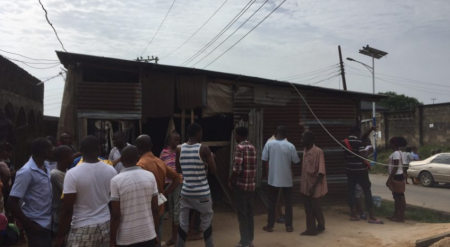 Little did they know that Thursday night, when Manchester United hosted Anderlecht in a return leg of the Europa League quarterfinal match, was going to turn out to be a great tragedy.

A high-tension cable which according to a Port Harcourt Electricity Distribution Company (PHEDC) official, was the UNICAL 11KV Feeder, fell on the viewing centre electrocuting many of the passionate football lovers who were in the building at about 9.30pm.

Initial reports put the casualty figure at over 30, but when our correspondent got to the scene of the incident, several eyewitnesses said the number of people that died on the spot ranged between seven and 10.

The Nation observed that the viewing centre, constructed with zinc was located directly under the high-tension cable, just like many other buildings in the area.

The cable fell on the building after an explosion from a transformer that was located nearby.

It was gathered that while the match was on the there was a loud explosion from the transformer and the power went out and the cable landed on the roof of the viewing centre.

It was also gathered that those watching the game were aware of the cable that landed on the roof, but being so eager to continue their match and thinking there was no current in the cable as the power had gone out, urged the owner of the centre to put on his generator.

After the generator was put on they all went back inside to continue their match and then power was restored by PHEDC and the fire erupted in the building.

According to someone who was inside the centre, the building seemed to be vibrating. In the pandemonium that ensued as many made for the exit, several of them got electrocuted.

“As their bodies kept touching the zinc which had live electricity running through it and people’s bodies kept rubbing on other bodies in the confusion that is how the problem escalated,” an eyewitness described