For Sale - One Bedroom Executive Flat - Lagos (NGN37m)
✅ NEW - car park, swimming pool, 24 hours light/security and more.
Ad
Director-General of the Change Ambassadors of Nigeria (CAN), Chris Nwaokobia, has released a list of 40 achievements of President Muhammadu Buhari in nine months of his administration. 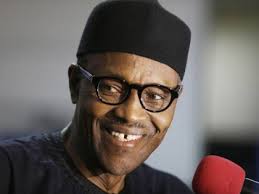 1. A frugal and prudent President as opposed to an era of profligacy.
2. From a near pariah status to its rightful place in the comity of nations.
3. Saved over 2Trillion through the Treasury Single Account TSA.
4. Renewed effort at diversifying our sources of revenue.
5. A reinvigorated war against corruption.
6. Allowing the independence of the Legislature.
7. Allowing the independence of the Judiciary.
8. Encouraging local content in production.
9. Encouraging pan Nigerian interest in local goods and services.
10. Protecting indigenous enterprise and businesses.
11. Strengthening institutions of government.
12. Introducing social securities and welfare as the linchpin of governmental engagement.
13. Providing for the feeding of school children.
14. Providing for the employment of additional 500,000 teachers in 1year.
15. Creating and funding a sub-regional force to curtail and defeat insurgency.
16. Funding and equipping the Armed Forces for National security.
17. Providing a window for the recruitment of additional 10,000 Policemen/women.
18. Inspiring Patriotism through a pan Nigerian engagement of functionaries of government.
19. Increasing Power wattage from less than 2,000 to over 5,000mega Watts.
20. Regaining all Nigerian territories hitherto under Boko Haram control.
21. Curbing corruption in the Customs and increasing the revenue that accrues through the Customs Service. 22. Recovering Billions of Dollars from Treasury looters.
23. Repositioning and restoring the productive capacities of our Refineries.
24. Suspending the drainpipe/scam called Fuel Subsidy.
25. Purging the Civil Service and removing close to 24,000 Ghost Workers.
26. Reworking our moral margins in governance.
27. Introducing fiscal and financial discipline.
28. Making accountability and transparency the only permissible minimum.
29. Reaching bilateral agreement with foreign nations to facilitate the repatriation of looted funds.
30. Attracting foreign/counterpart funding for the construction of ultra modern rail travel network across Nigeria.
31. Making financial provision for the 2nd Niger Bridge.
32. Increasing duties that accrue on imported goods, with intent to inspire and re-engineer exportation.
33. Bail out and support of States in paying salaries and workers emoluments.
34. A renewed public/private sector partnership on Agricultural development.
35. Financial provision for the Bank of Industries to support and fund agricultural projects.
36. A renewed effort at rehabilitating our national sporting facilities and stadiums.
37. Commissioning a North East development and intervention body.
38. Approving the Cleansing of the Niger Delta space to mitigate the damage of oil spillage.
39. The commitment of leadership to creating skill acquisition centres and support for SMEs in collaboration with the Private Sector.
40. None interference with Court judgments regarding election matters, and advancing the independence of the electoral process across the Nation.
A

CAN go and sit down you have nothing to offer