FREE Nigerian Business Directory
✅ NEW - get your business listed and your information shared across social media.
Ad
The fiery Priest and Director of Adoration Ministry, Rev. Fr. Ejike Mbaka may be transferred out of his station, Christ the King Parish in GRA, Enugu State, Daily Sun reports.

The speculated transfer of Mbaka by Enugu Catholic Diocese is coming against the backdrop of his recent prophecies especially in the politics of Nigeria where he predicted the defeat of former president Goodluck Jonathan at the polls. 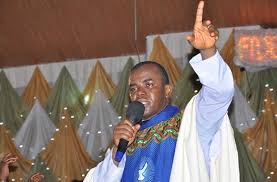 Reliable sources also said that the decision to remove Mbaka was scheduled to affect other priests in an attempt to make it look like a routine church affair.

Another source, however, confirmed that the church is afraid of the possible reaction of his followers and the adoration faithful, who make up more than 80 per cent of the population of Enugu Catholic Diocese.

Mbaka was criticised extensively by the clergies in the South East when he backed President Muhammadu Buhari to beat Jonathan in the March 28, 2015 elections.

Metro Assassination attempt on me is real – Mbaka – The Nation Nigeria