FREE Nigerian Business Directory
✅ NEW - get your business listed and your information shared across social media.
Ad
The security personnel attached to the Chairman of the Code of Conduct Tribunal, CCT, Justice Danladi Umar has been strengthened ahead of tomorrow’s trial of the Senate President, Bukola Saraki.

The Nation reports that more undercover security agents have been drafted to Umar’s residence and office and the security privilege is said to have been extended to his immediate family,

The report quoted a source as saying that the heavy security around Umar is targeted at wading off undue pressure and allowing the CCT Chairman to carry out his duties without undue influence. 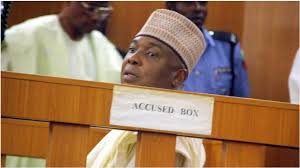 “There is now an enhanced security around the CCT chairman and his family, more plain-cloth agents have been drafted to his residence and office. His movement is now being well policed and I think this is due to the sensitive nature of the assignment”, the source told The Nation.

It was learnt that the CCT Chairman has restricted phone calls to only essential family members, and consequently barred visitors from his residence.

Source: TheNation
You must log in or register to reply here.