Saraki’s new lead counsel, Chief Kanu Agabi (SAN)‎, informed the Danladi Umar-led tribunal that he had filed a motion which he said must be heard before trial could commence.

But the lead prosecuting counsel, Mr. Rotimi Jacobs (SAN), described the motion as “a deliberate attempt to stop the trial from going on”, saying he had not been served with the motion, insisted that by virtue of the judgment of the Supreme Court delivered on February 5 which validated the trial, the day’s business was for the prosecution to open its case. 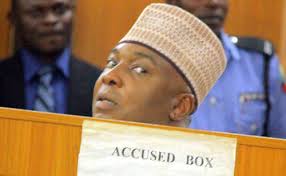 Agabi, who later apologised for the erroneous service of his motion on the Federal Ministry of Justice instead of the prosecution, said since his motion was challenging the jurisdiction of the tribunal, it must be heard before going into the substantive case.

Jacobs later accepted service of the motion in open court and the tribunal chairman resolved that the two parties should exchange other processes in relation to the motion before March 18‎.

Danladi later adjourned the ruling adding that ruling on the motion and trial would commence on the same day, March 18th.