FREE Nigerian Business Directory
✅ NEW - get your business listed and your information shared across social media.
Ad
The Economic and Financial Crimes Commission (EFCC) said that it has taken more evidence to the United Kingdom against ex Petroleum Resources minister, Diezani Alison-Madueke.

The commission said it is set for the her trial here in Nigeria and anywhere in the world.

This came as a court in the United Kingdom has set a day in June for the trial of the former minister for money laundering.

EFCC also dismissed speculations that the it wasn’t negotiating with Diezani Alison-Madueke saying that “she has consistently maintained that she is ready for trial. So, what is the basis for negotiation when we have a good case?” 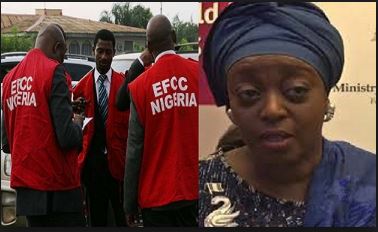 An EFCC source said: “The UK investigators have gone far on the allegations against Diezani.

“From the records made available, the ex-minister and four others will face trial as from June.

“We have taken more evidence to the UK, including all court records relating to the final forfeiture of $153million. We have a huge pile of documents.”
You must log in or register to reply here.