The same court led by Justice Ishaq Bello convicted and sentenced, Emeka Ebila, a former Secretary, National Economic Intelligence Committee (NEIC), to five years imprisonment each on all the counts without an option of fine.

The court held that there was no evidence adduced by the prosecution to link Ogbulafor with receiving any money from Ebila, adding that the N28 million allegedly given by the second accused to him was hearsay.

Justice Bello said that the only reason linking him was because he was the Supervisory Minister for NEIC, but "there is no evidence to show that he played a role in the establishment".

Justice Bello also held that the court could not act upon the statement that Ogbulafor nominated Ebila, adding that the prosecution failed by not exhibiting the bank account where the first accused received the money.

The judge held that Ebila masterminded the whole act.

Delivering Judgement, Justice Bello said, "in totality the prosecution has failed to proof all the 17 count charges against Ogbulafor, but proved its case against Ebila. I, hereby, discharge and acquit Vincent Ogbulafor in all the charges and convict the second accused.

Ogbulafor, Ebila and Jude Nwokoro were charged by the ICPC with a fraud of N170 million on the issuance of fake documents, payment of money for non-existent contracts on June 17, 2001

Ogbulafor was then the Minister of Special Duties and Ebila was Secretary, National Economic Intelligence Committee. 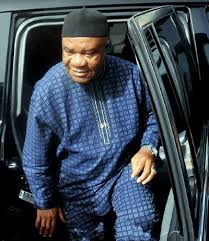