David Adedeji Adeleke better known by his stage name Davido is an American-born Nigerian recording artist, performer and record producer. His 2011 single "Dami Duro" was well-received throughout Nigeria. Along with his elder brother Adewale Adeleke, Davido is the co-owner of HKN Music. He has produced songs for Naeto C, Skales, Tiwa Savage and Sauce Kid.

He recently announced plans to award scholarships to students who cannot afford it which will take off very soon.

He has been voted by our readers as the Nigerian Bulletin Personality of the Week. Congratulations to him.

Thanks to everyone who voted. See you next week. 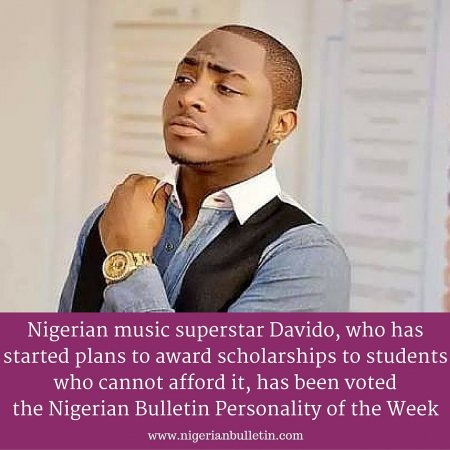