Nigeria- Students of the Delta state polytechnic yesterday according to Sahara Reporters staged a fierce riot over the recent hike in their school fees and an outrageous order by the rector that every student must vote for all PDP candidates in the forthcoming elections.

The riot lasted for hours and 3 students were shot by the police.

Excerpt:
Sudents of the Delta State Polytechnic, Ozoro in Isoko North local government area of Delta State, on Wednesday staged protests against a hike in their school fees and the institution rector’s call to vote all candidates of the Peoples Democratic Party (PDP) in the 2015 general elections.

SaharaReporters learned that anti-riot police codenamed “Lion Squad” shot three students during the protests that started close at noon and lasted for close to three hours. The police also teargased the students and sporadically shot into the air.

Student and police sources said the protests paralyzed economic and social activities. Some furious students destroyed the billboards of PDP candidates. Some of the protesters carried placards that read, “Rector you cannot force us to vote for PDP,” “Dr. Jacob Oboreh, leave us to vote for the candidates of our choice,” “Reverse to the old school fees,” “You can't increase school fees on your own,” “You must return to the former school fees.” 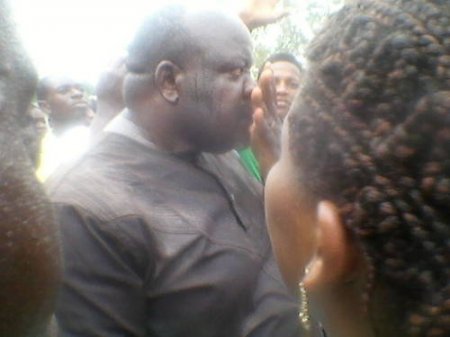