For Sale - One Bedroom Executive Flat - Lagos (NGN37m)
✅ NEW - car park, swimming pool, 24 hours light/security and more.
Ad
The governors of the 36 states of the federation Thursday demanded the release of some of the federal roads to the states for rehabilitation and reconstruction in view of the deplorable state of such roads and the federal government’s inability to fix them all.

Briefing State House correspondents at the end of Thursday’s National Economic Council (NEC), presided over by Vice-President Yemi Osinbajo in the Presidential Villa, Abuja, the Governor of Ebonyi State, Mr. Dave Umahi, said in view of the deteriorating state of Nigerian roads, NEC approved the governors’ decision to write President Muhammadu Buhari to demand the release of some federal roads to them.

According to Umahi, the roads would be fixed through private public partnerships with the aim of tolling the roads and consequently save Nigerians the pains of plying collapsed roads. 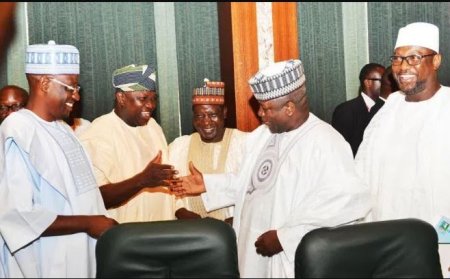 He said if granted, concrete measures would be employed to construct the roads with a view to guaranteeing their longevity.

He also said the council resolved that the Minister of Power, Works and Housing, Mr. Babatunde Raji Fashola, should come up with strategies on how to control the weight of items being conveyed by trucks on the roads which he added was the major cause of frequent collapse of roads.

Responding to a question on the ability of state governments to assume the responsibility of road rehabilitation and maintenance, given their inability to pay workers’ salaries, the Kwara State Governor, Mr. Abdulfatah Ahmed, said despite the challenges of unpaid salaries confronting the states, they could still take on the responsibility of fixing federal roads through public private partnerships and achieve good results.

Politics Govs: We Were Not Elected to Only Pay Salaries – Thisdaylive