Briefing newsmen in Abuja on Tuesday, Olukolade said that the Nigerian military consider human right issues seriously and would never condone any proven case of abuse by its personnel.

He said that the team would also investigate the resultant allegations of infractions in order to ascertain the veracity of the claims with a view to identifying those behind such acts.

Olukolade explained that the investigation would further determine and stimulate necessary legal action against any personnel or anyone found culpable in accordance with the provisions of the law.

He explained that the military had over the years demonstrated a pedigree devoid of such acts in several operational theatres in and out of the country.

He said there was "no reason why this should change at this stage of our national life’’.

The director noted that the Nigerian Armed Forces cannot condone any action or inaction that tramples on the right to life of any Nigerian.

Olukolade said that the military welcomes the interest being shown by international bodies and civil society groups on observance of human rights in all aspects of the ongoing counter terrorism campaign in the country.

"Despite the highly challenging and peculiar nature of the variables in the operations, the importance of accountability for all actions had remained paramount. The Armed Forces of Nigeria is conscious of the nation’s obligation to observe all rules, regulations and commitments in all activities.

"And the military wishes to assure the international community, bodies and citizens that it will not encourage or condone any form of violation,’’ he said.

Olukolade said that military authorities were deeply concerned about the set of video footage being circulated and which unfortunately has also become reference data for Amnesty International in its report.

"Much as the scenes depicted in these videos are alien to our operations and doctrines, it has to be investigated to ensure that such practices have not crept, surreptitiously into the system. The DHQ considers these allegations too grievous to be associated with Nigerian troops, considering the doctrinal and operational contents of the training imparted to personnel on a continuous basis;

"Emphasising the importance of respect for Human Rights and dignity of human person as well as observance of humanitarian laws,’’ he stressed.

Olukolade assured that the investigation would be conducted notwithstanding the cases of impersonation that have pervaded the counter terrorism operations in Nigeria and many other related issues which cast doubts on the claims made in the video.

He said that the DHQ authorities view those grave allegations very seriously, more so as it borders on the integrity of the ongoing counter-terrorism operation, which must be sustained in the interest of our national survival.

Olukolade said that the ultimate objective of Nigeria’s counter-terrorism operation was the complete cessation of the heinous and barbaric activities of the terrorists.

He said the objective was also to stamp out every vestige of terrorism in our country with the application of international best practices in such operations.

"It will therefore be absurd for the Nigerian Armed Forces as an institution to perpetrate such unprofessional acts in the manner and level depicted in that video as alleged by Amnesty International. Indeed, that level of barbarism and impunity has no place in the Nigerian military. Respect for the sanctity of life is always boldly emphasised in our doctrinal trainings.

"It must thus be reiterated that the Nigerian military is a very well organised professional body of troops whose conducts in war and peace times are guided comprehensively by law," Olukolade stated.

He also said that Armed Forces of Nigeria is conscious of the country’s obligation to observe all rules, regulations and commitments in all activities.

Olukolade, however, assured all Nigerians, civil society organisations and the international community that the armed force recognised Amnesty International, and therefore remain committed to observe of rules of engagement and human rights in its counter terrorism operations. 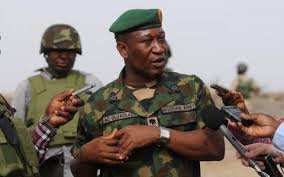