He said the Hameed Ali is not fit to man the position of the Customs Comptroller General.

His words in tweets:

Sen. @dino_melaye asks "Can the Court Process Stop any form of Government from carrying out Constitutional duties?". 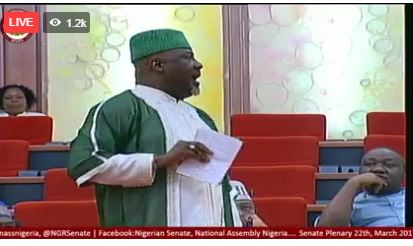 Sen. @dino_melaye says it is the first time the Attorney General will write to the Senate on how to run the Senate.

Sen. @dino_melaye says it is not a Court injunction, not an order, it's a mere Court Process. The position of CG @CustomsNG is a rank and anyone occupying it is a Public Servant. He invokes the Public Service Rule.

The Senate last week sent away the customs boss for appearing in mufti over a new duty policy.