President Muhammadu Buhari has warned his ministers-designate not to waste the nation’s resources as soon as they assume office. 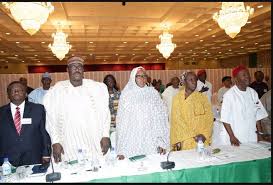 The president while urging them to avoid impunity as ministers, charged them to key into the change agenda of his government. Buhari gave this charge while speaking at the ongoing retreat for the incoming ministers at the Banquet Hall of the State House in Abuja. The president, however, reminded the ministers-designate to use the office of his chief of staff as official communication Channel in line with the presidential system of government.

He further vowed to keep fighting corruption, solve unemployment problems, tackle insecurity and also diversify the economy for sustainable growth. The retreat, which started on low key at the Transcorp hotel in Abuja on Wednesday, is with the them “Delivering Change: From Percepts to Practice”. In attendance were all the 36 ministers-designate, including Raji Fashola, Rotimi Amaechi, Audu Ogbeh and others.