A mild drama played out at the Council Chambers of the Presidential Villa, Abuja on Wednesday before the commencement of the meeting of the Federal Executive Council.

A heated argument took place between the Chief of Staff to the President, Abba Kyari; and the Head of the Civil Service Service of the Federation, Winifred Oyo-Ita.

As soon as Oyo-Ita got seated at the Council Chambers of the Villa this morning, Kyari engaged her in a discussion which appeared heated. 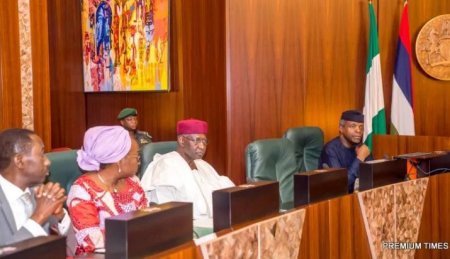 Visibly angry, according to Dailytrust, the Head of Service was overheard telling Kyari that she had reached the peak of her career in the civil service and that she is not an elected official.

Oyo-Ita later rose from her seat and headed straight to Osinbajo, who also engaged her in a tête-a-tete over the issue.

The mild drama played out in the presence of Vice-President Yemi Osinbajo; President of the Senate, Bukola Saraki; Speaker of the House of Representatives, Yakubu Dogara, and the National Chairman of the All Progressives Congress, John Odigie-Oyegun.
E

Curators
what does abba kyari have on buhari? how did buhari loose control of his government liker this? I take that back, Buhari is aware of everything that goes on

Whatever happens, I like that Oyo-Ita isnt allowing him walk over her. Silly man!!!
Last edited: Nov 1, 2017
A