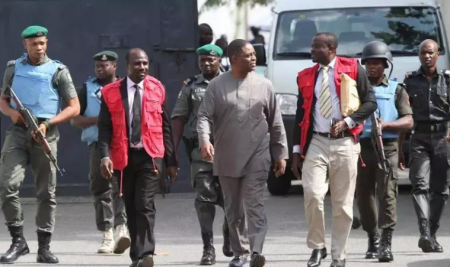 The duo had stormed the court to show solidarity to detained leader of the Indigenous People of Biafra, Nnamdi Kanu.

However, Fayose, who is putting on an Igbo chieftaincy red cap, was temporarily denied entry into the court room scheduled to deliver ruling on whether Nnamdi Kanu, should be released on bail pending his trial.

Equally denied entry into the court was a former Minister of Aviation, Mr. Femi Fani-Kayode.

Fani-Kayode, who is equally facing criminal charges the Economic and Financial Crimes Commission, EFCC, preferred against him, upon his arrival at the court to face his trial, sought to gain entry into the sister court handing Kanu’s case but was blocked by operatives of the Department of State Service, DSS.

Kanu, who was hitherto the Director of Radio Biafra and Television, is facing trial alongside three other pro-Biafra agitators, Chidiebere Onwudiwe, Benjamin Madubugwu and David Nwawuisi. Trial Justice Nyako had slated today to rule on applications by the defendants seeking to be admitted to bail pending determination of the five-count criminal charge the Federal Government slammed against them

Mr president is wasting his time on this issue

Nigeria is too far ..from practicing democracy... no freedom of association ... nor speech..
B

Nigeria my country... All is well
O

They have tried all they could to dilute the immune Kanu have but all to no avail.
O

Chukwu okike will you through Mr. Kanu
O

See you through Mr. Kanu

Metro DSS: Court can’t Compel us to Prosecute Fani-Kayode, Others over Kanu’s Escape – Plus TV Africa