FREE Nigerian Business Directory
✅ NEW - get your business listed and your information shared across social media.
Ad
Mild drama at the Nigeria Senate on Thursday as Senator George Sekibo (PDP Rivers) momentarily disrupted proceedings by whistle blowing on the controversial Ikoyi multi-billion cash find on the floor of the Senate.

According to Order Paper, Sen. Sekibo, got up at about 11.07 to perform the queer act, acted in protest of the refusal of the Federal Government to return the controversial $49 million discovered at the Ikoyi apartment in Lagos to the Rivers State Government.

He brought out a whistle and started blowing taking the presiding officer, Senator Ike Ekweremadu unaware. 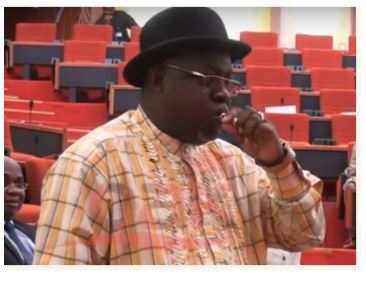 Sekibo was said to have blew the whistle three times pointing the attention of the Senate to investigate the issue.

Ekweremadu, Deputy Senate President, told the whistle-blowing senator that since the case was already being investigated by the House of Representatives and advised the Rivers state governor, Nyesom Wike to make appropriate representation at the lower chamber.