The FCT Administration has commenced the distribution of preventive items against the Ebola Virus Disease (EVD) as directed by the Federal Government for the resumption of schools on Sept. 22.

Malam Kabir Usman, FCT Secretary for Education, who made the statement on Saturday in Abuja at a press conference, said the items would be distributed to 1,264 schools across the FCT.

``We are gathered here today to begin the distribution of all the items required to ensure a safe and virus free school environment for our children.

He said the administration had also commenced the fumigation of schools.

He said that water tankers would be dispatched to schools which do not have running water.

He expressed satisfaction that no case of EVD had been recorded in the territory.

Usman said the distribution of the items would be a continuous exercise until the health authorities ascertain that the danger of the EVD was over.

He called on the management of schools in the territory not to admit any pupil or student with malaria.

``I urge parents to take pre-emptive measures against ailments like malaria that might show some symptoms similar to Ebola,’’ he said.

The secretary told newsmen that as part of efforts to check the outbreak of the disease, schools that run entrepreneurship programme would commence the production of liquid soap by December 2014.

He said that students would be trained on how to produce liquid soap to encourage continuity in hand washing practice in all schools.

In his remark at the occasion, Mr Hassan Jibir, Chairman, National Union of Teachers (NUT), FCT chapter, said members of the union would monitor schools to verify if the items had been distributed.

``We are not saying we are lazy or we do not want to work, what we want is safety for both the children and teachers.

``If the children are safe are the teachers’ safe,? he asked rhetorically.

A teacher Mr Sunday Udom from School for the Blind, promised that the items would be utilized as directed by the government. 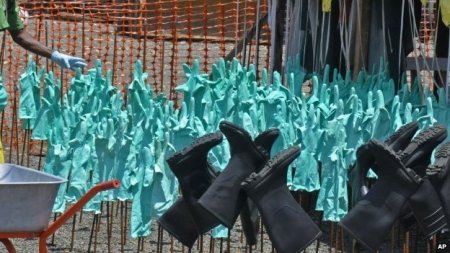 If our leaders and Nigerians accorded the nation as much respect, priority and attention as Ebola received, the country would be a dream come true. Good job on the EVD campaign thus far.