For Sale - One Bedroom Executive Flat - Lagos (NGN37m)
✅ NEW - car park, swimming pool, 24 hours light/security and more.
Ad
On Wednesday, a Texas hospital 'accidentally' discharged an Ebola patient and had to scramble to locate him after he had gone home.

The Dallas hospital patient who has tested positive for Ebola virus indicated on his first visit that he had traveled to the city from West Africa, but was released after that information was not communicated to the entire medical team who treated him.

The patient first arrived at Texas Health Presbyterian Hospital in Dallas late on Sept. 25, complaining of a fever and abdominal pains, hospital officials said at a news conference. A nurse administered a checklist, on which the patient indicated that he had recently traveled from Liberia. Nevertheless, the hospital sent him home.

“The overall clinical presentation was not typical at that point yet for Ebola,” said Dr. Mark Lester, vice president and zone clinical leader with Texas Health Resources, noting that the patient lacked some traditional hallmarks of the disease, which include vomiting and diarrhea. “Regretfully, that information was not fully communicated throughout the full team.” 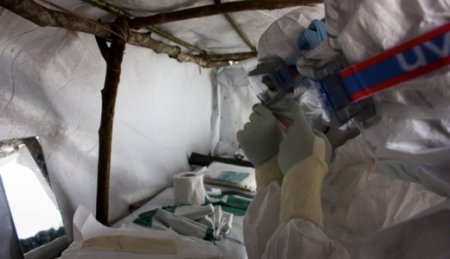