Elechi gave the clarification in an interview with State House correspondents after meeting with President Goodluck Jonathan at the Presidential Villa, Abuja.

He was responding to a question on the reported endorsement of Chukwu on October 7 as the consensus governorship candidate of the party ahead of the 2015 general elections.

Elechi said, "Let me put the facts straight: first, the Minister of Health has no ambition to become governor or hold any other political office. But we, the people of Ebonyi state, have assessed him and we think he is a good material to do that job.

"So we are appealing to him, he is not canvassing, but we want to conscript him to answer the call of his people; that’s the true position. I have known him for many years as Chief Medical Director in our teaching hospital back home; he is a serious-minded person and as minister of health the nation is his witness.

"He is focused and determined to do things right and I think we need people like that; people who do things right. We have not endorsed him; we are saying he should show interest. It is still the state congress that will select whosoever they want; it is not against the dictates of the NWC (National Working Committee).

Chukwu was reported to have been endorsed by state PDP leadership on October 7 as the consensus governorship candidate of the party ahead of the 2015 general elections. 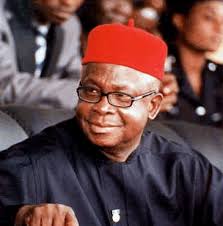 Politics ‘Only My Candidate Can Win in Bayelsa’ – Gov Dickson – Olisa.tv