The Economic and Financial Crimes Commission has launched a fresh manhunt for the former head of the Presidential Task Force on Pension Reforms, Abdulrasheed Maina.

Mr. Maina was sacked from the civil service in 2013 and was in 2015 placed on the wanted list of International Police (INTERPOL) by the EFCC. 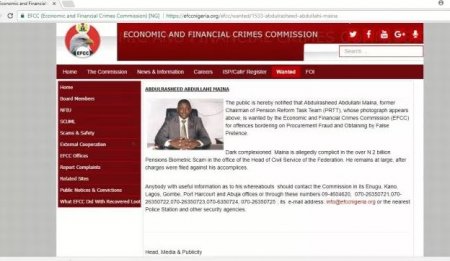 A top official of the EFCC had on Friday told Premium Times that Maina is still wanted by the commission in relation to the pension scam for which he was arraigned in absentia.

“We are still looking for him. He is a wanted man. He ought to be arraigned with Oronsaye and the rest but he disappeared,” said the official, who pleaded anonymity.

He said the commission will immediately revisit the case as it continues search for the embattled civil servant.