Chuku was picked as the consensus candidate at a meeting of PDP stakeholders from the old Abakaliki caucus, comprising the current Ebonyi North and Central senatorial zones.

Chief Sam Agom-Eze, a former banker and Mr Ben Akpa, a former commissioner, who had earlier indicated interest in the Ebonyi governorship seat were made to step down.

Governor Elechi thanked the aspirants for stepping down, saying, "Ebonyi is a poor but strong state and part of our attitudinal change tenet is doing things right which I believe we have done with this decision.

"There is no need for unnecessary struggles, mudslinging and waste of resources, as we all should support the right things whenever they are done. 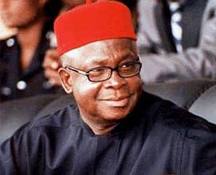 @Okey Mordi I think the consensus thing is wrong, leaders are being handpicked in a Democracy; shouldn't happen anywhere. The PDP needs to caution it's governors