Durable luxurious Sideboard in Maple Wood - ₦150k (made to order)
Maple Wood with 3 drawers and 2 doors
Ad
The Kano State Emirate Council on Monday admitted that Emir Muhammadu Sanusi II, spent 3.4 billion Naira since he as assumed office in 2014.

He debunked claims that the emir, Muhammadu Sanusi II, has spent N6 billion of the emirate’s fund.

At a press conference in Kano, the senior council official in charge of finance who is also the Walin Kano, Bashir Wali, told reporters that the emirate has only spent N3.4 billion since Mr. Sanusi emerged emir in June 2014. 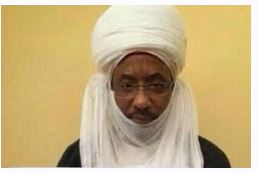 Mr. Wali, who provided some details of the expenditure, also explained that the Emir Sanusi inherited N2.9 billion (exactly N2.895,165,43.77) and not N4 billion as stated in some media reports.

Curators
What is the breakdown of the expenditure. Some men are more equal than others.. All this during recession
P

curator said:
What is the breakdown of the expenditure. Some men are more equal than others.. All this during recession
Click to expand...

Is this money from state coffers?
A

The question is, on what exactly did he spend it on?
B

What did he spend it on?
A

Am just fed up of this country
F

They will leave serious matter and talking about fake on
C

Hmm
You must log in or register to reply here.

Metro North Will Destroy Itself If It Doesn’t Change –Emir Of Kano, Sanusi – Sahara Reporters