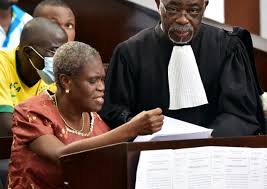 Known as the "Iron Lady", she has already been sentenced to 20 years in prison for "attacking state authority" over her role in post-election violence in 2010 that left more than 3,000 people dead.

The conflict ended when her husband Laurent Gbagbo was captured by UN and French-backed forces loyal to current President Alassane Ouattara.