Human Rights Activist Chief Femi Falana (SAN) would on Monday, 25th of April, file a case of genocide and ethnic cleansing at the International Court of Justice (ICJ) in Hague and the ECOWAS Court, against Fulani herdsmen for their continued massacre of the innocent people and farmers in Jukunland, of Southern and Central Taraba State, in North Eastern part of Nigeria. 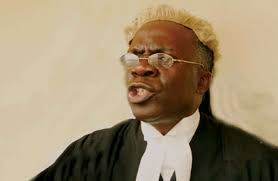 Falana called on the Federal Government to take urgent and drastic action against the massacre being perpetrated by Fulani herdsmen against innocent farmers before they throw the nation into another avoidable war.

He expressed shock at the scale of the “unprecedented massacre of unarmed farmers” being killed by these herdsmen in Jukunland in Taraba State and the other parts of North Central Nigeria everyday, describing it as “a mindless pogrom”.

He spoke when he received in his office the leaders of the Jukun Development Association of Nigeria who had come to submit to him, a 1000 page document detailing the targeted cleansing of their people by the rampaging herdsmen.

He said: “It is very clear by the pictorial and other evidence contained in this evidence that the people of the North Central Nigeria are going through terrible things daily in the hands of these herdsmen. Lives and properties are no longer safe from these people who killed and maim, and rape women at will just because they wanted their cattles to graze on other people’s farmlands.”

He therefore charged the Federal Government to move security agencies to the North Central state of Taraba in other to protect the lives of innocent Nigerians who are being killed in their farmlands everyday by these blood sucking herdsmen, before the people resort to self help.

The National President of the Jukun Development Association of Nigeria Mr Benjamin Bako said the group had approached the legal luminary to help defend their cause and draw attention to the plight of their people who are being killed everyday by the ravaging herdsmen.

Bako disclosed that the group had compiled a thousand paged document to back their claim, detailing the atrocities of these violent men in their land in the last four years.

He said the association has since submitted copies of the document to Human Rights Watch, Amnesty International and other rights organisations around the world.
PLACE YOUR ADVERT HERE
Connect with Politics News Readers!