He said: “That Mauzu betrayed us during the 2015 pres. campaign and that Jega was working for @MBuhari is not news.

“The biggest secret and greatest traitor of them all was the man that brought both Mauzu and Jega to do a dirty job and sabotage our efforts. His name was Hassan Tukur.

“He is an evil genius. His treachery and collusion with the APC cost us the 2015 election and opened the door for Buhari. God will judge him”. 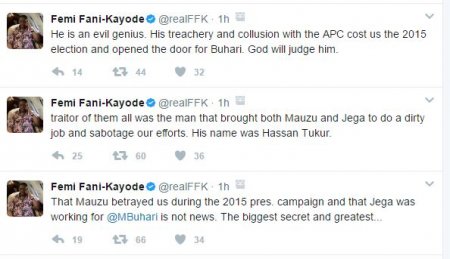 Quoting Jonathan, Adeniyi in his new book titled, ‘Against the Run of Play’ wrote, “I was disappointed by Jega because I still cannot understand what was propelling him to act the way he did in the weeks preceding the election.”

Why did it take this long for FFK to speak out?
M

YOU ARE A JOKER FOR THIS TALK NOW..