FREE Nigerian Business Directory
✅ NEW - get your business listed and your information shared across social media.
Ad
Governor Ayodele Fayose of Ekiti State has fired back over claims that the former Minister of State for Defence, Mr. Musiliu Obanikoro allegedly told the anti-graft agency that he received money for his election from him.

Fayose, who denied the allegations in a statement, said rather than dissipating energy on what he described as “Fayose must be implicated at all cost” project, the Federal Government should “pay attention to hunger and suffering ravaging Nigeria and its people and leave me alone.”

In the statement signed by his Special Assistant on Public Communications and New Media, Lere Olayinka, Fayose said: “This project ‘Fayose must be implicated at all cost’ will definitely not put food on the tables of Nigerians and for all I care, the EFCC and its collaborators can keep running from pillar to post while I keep delivering good governance to Ekiti and its people.” 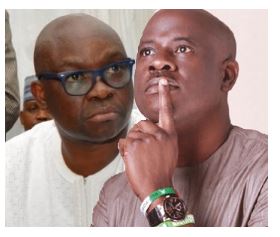 The statement said, “The governor dismissed the reported claim that former Minister of State for Defence, Senator Musiliu Obanikoro confessed to the EFCC that he received fund from the Office of the National Security Adviser (ONSA) under Colonel Sambo Dasuki (rtd) to fund his election.”

According to Fayose, “We have gone past this stage of media trial. EFCC should rather keep its gun powder dry; when we get to the bridge, we will cross it. They said more than this in the 2006 poultry scam blackmail; despite that, I am the governor today.”

Governor Fayose said he was “only reacting just to fulfil all righteousness because Nigerians are more interested in having food on their tables,” saying “those who arranged the dramatic and compromised return of Senator Obanikoro to Nigeria obviously did so in continuation of their project ‘Fayose must be implicated at all cost’ but I am not bothered because my election was legitimately funded.”

The Drama in the whole saga, it's a distraction from the problems we already have