Politics Fayose: I Have No Score to Settle With Mimiko, Bode George 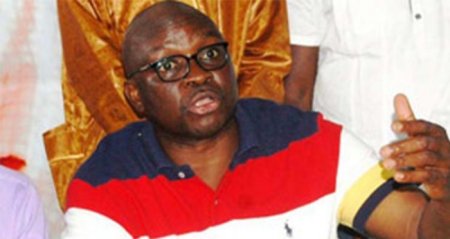 The Ekiti State Governor, Mr. Ayodele Fayose has refuted the report that he and some leaders of the Peoples Democratic Party in the South-West are having issues over the forthcoming election of the national chairmanship of the party.

According to a report filed by PUNCH, Fayose said specifically that he had no score to settle with the Ondo State Governor, Dr. Olusegun Mimiko and the former Vice Chairman of the party in the South-West, Chief Bode George over leadership matters.

Fayose stated this while speaking at a meeting of the South-West leaders of the party, held at the International Event Centre, Akure, the Ondo State capital on Wednesday.

He said, “I read it in the newspapers that Chief Bode George abused me, but you can see me and him sitting beside each other here. He and I have come a long way, we are together. Dr. Mimiko and I have no score to settle too, we are together we are bound to agree.”

While charging the leaders to embrace unity for the party to move forward, the governor urged members to elect the people with ideas to run the affairs of the party at the forthcoming National Convention.

“There is nothing wrong with the PDP but the individuals in the party, I want us to push forward people with great ideas, Nigeria is too big for octogenarian to be the President. We need young people with energy to do this job for us,” he declared.