For Sale - One Bedroom Executive Flat - Lagos (NGN37m)
✅ NEW - car park, swimming pool, 24 hours light/security and more.
Ad
A female suicide bomber named Arin Mirkan has blown herself up in the ISIS-besieged town of Kobani, taking out dozens of the jihadists with her.

This gave Kurdish forces the chance to strike back at the Sunni Islamists who had initially attacked the town from three sides with tanks and mortar fire.

It is strongly believed that regaining control of Kobani is a vital step in stopping the advances of ISIS.

"Of our martyrs was valiant comrade Arin [Mirkan], she was able to perform a fedai action [self-immolation] and kill dozens of Isis mercenaries and stop their advance, such strong will and determination shown by comrade Arin will be the spirit of resistance in the hearts of all of our combatants of the People's Defence Units and Women's Defence Units," a YPG statement said.

"If needed, all of our fighters will be comrade Arin and shall not allow the mercenaries reach their wishes at whatever cost."

The Syrian observatory noted that seven new US-led coalition strikes against Isis were conducted in the Kobani area. It reported that at least 33 Isis fighters and 23 of the town's Kurdish defenders were killed. 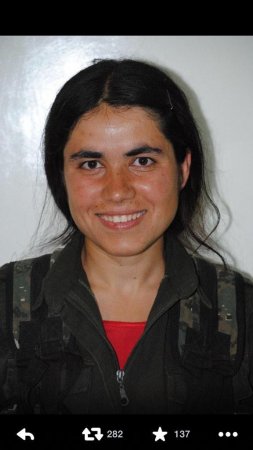