Metro FG Closes Case Against Orubebe AT The CCT

The Federal Government yesterday closed its case before the Code of Conduct Tribunal ( CCT) against the former minister of Niger Delta, Godsday Peter Orubebe, and adjourned to May 31, 2016 for him to open his defence. 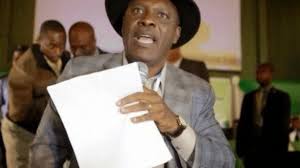 The Director of Public Prosecution ( DPP ) of the federation, Mr. Moses S. Odiri, who was represented by Ejike Augustine Orji (SSC), closed the government’s case.