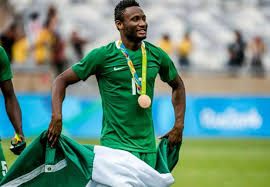 Mikel's former club Chelsea, where he spent 10 years before leaving for China in January, also celebrated the midfielder in a tweet on their official handle.