The building which has a restaurant beneath, was razed by the inferno, leaving a trail of devastation.

The fire started at about 4.00 a.m. on Wednesday and was allegedly caused by electric sparks. The fire was put out at about 6.30 a.m. by a combined team from the Federal Fire Service, the Lagos State Fire Service and the Nigerian Security and Civil Defence Corps (NSCDC).

In an interview with NAN, the Registrar of the Marriage Registry, Mr Sam Kasali, described the fire as a shock.

An Assistant Commandant at Ikoyi NSCDC office, Mrs Esther Onilede, said the fire was brought under control also with the use of fire extinguishers in addition to the effort of fire-fighters.

She said that the relevant authorities had been contacted to pull down the burnt building.

Also speaking on the fire, the officer in charge of the Nigerian Legion, Mr Yinusa Folorunsho, said an investigative panel had been set up following a directive from the headquarters. 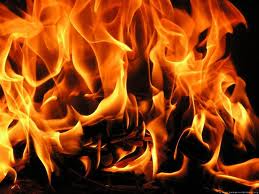