For Sale - One Bedroom Executive Flat - Lagos (NGN37m)
✅ NEW - car park, swimming pool, 24 hours light/security and more.
Ad
A report by Daily Post newspaper says that a fire broke out a few hours ago which swallowed up the second floor of the Murtala Muhammed International Airport (MMIA) terminal in Lagos State. The fire was however speedily stopped before the damage could spread.

Eyewitnesses say the fire was the result of an electrical surge and it began on the second floor of the terminal in the FAAN commercial department.

As expected, the first signs of smoke inspired panic and pandemonium, but it is reported that the place is calm now. 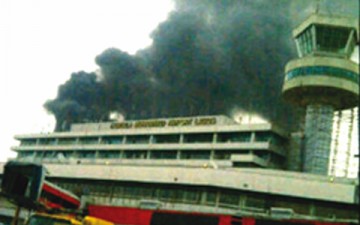 Metro FAAN closes some sections of Lagos Airport, here is why – Nairametrics