Former Governor of Anambra state, Peter Obi has resigned his position as Chairman, Board of Trustees of the All Progressives Grand Alliance, APGA.

The former governor cited family and personal reasons as part of the reasons for his resignation, but did not give details. He however wished the party well in its future endeavours, assuring that he remains an ordinary APGA member. 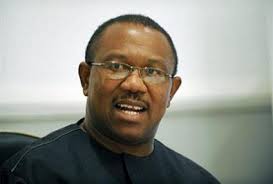 E
Politics APGA chairman: Peter Obi can’t achieve anything politically unless he returns to our party - The cable