Curators
Barbara Bush, the former US first lady and literacy campaigner, has died at the age of 92.

She was the matriarchal figure of a political dynasty that included two presidents - her husband George HW Bush and son George W Bush.

Mrs Bush, who was first lady from 1989 to 1993, had been in failing health for some time and had declined further medical treatment.

Tributes to her poured in from across the US political establishment. 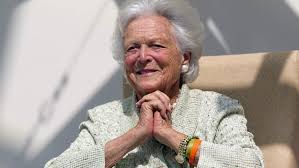 Get more World News
Last edited by a moderator: Apr 18, 2018
You must log in or register to reply here.