She made the accusation via Instagram where she also shared a photo of her battered self . Ajoke wrote, ''In this day my darling husband saw his wife and mother of his child bleeding on the floor but was still hugging and puffing. Swearing on his mothers life that that was going to be my last day on earth. Swearing that he would "enter Instablog" as the next man who killed his wife. I can't help but imagine 2 conductors on the street fighting, 2 strangers. When one starts to bleed the other would think "ha make I calm down oh" talkleas of beating your defenseless wife who did Nothing to you (or please ask him, what I did, I would love to be able to make sense of this, love to know my offense).

''He showed no mercy,still said to me that I was going to drown in my blood. He locked all doors, even balconies invade I wanted to jump out! The man I loved striped to his underwear in front of my friend and the abuse went on for hours, he had 2 of his own friends in the house and even they weren't enough to stop him, he was exchanging blows with them, just to get to me. It was as though he had 5 men inside him,determined to kill me. I excaped only by the grace of God. My friend and I were running on the street with blood on me like this and people wondering what happened to us. And this was just one day. I can write a book on the living hell I lived. And it's you, who has the guts to bring this to instagram? You are not even worthy of being a role model to your son yet You think you a motivational speaker now? 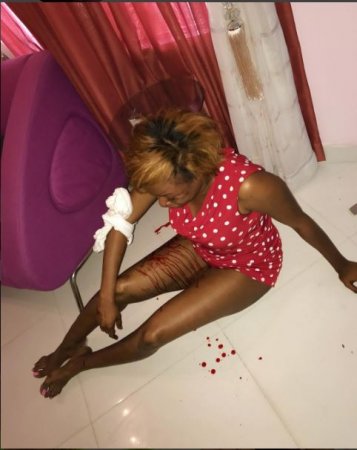 Who took this photo?
P

I don't approve of domestic violence, but I think I am daily getting sick of stories like this. We have had enough of them already. It may not be all entirely true. Toke. Tonto. Tiwa said worse. We know what happened after...
A

Oluogunjobi said:
Who took this photo?
Click to expand...

The man I loved striped to his underwear in front of my friend and the abuse went on for hours
Click to expand...

He does not love you. Pack out of that house before he kills you. A man who beats a woman, not to talk of his wife, is worse than a fool.

But I know how this story will end. The lady will move out, the man will go after her with a sullen face and beg, wife's family and husband's family will threaten, then beg, then threaten the woman. She will reconsider and move back to the man's house. Everybody is happy