Curators
FREE Nigerian Business Directory
✅ NEW - get your business listed and your information shared across social media.
Ad
Ajax manager, Frank de Boer has declared himself ready for "something else" after leaving his role as Ajax coach in the wake of their dramatic failure to retain the Dutch Eredivisie title on Sunday. 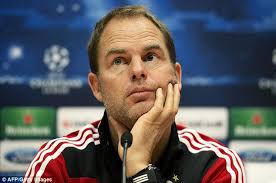 In a statement on Ajax's official website, De Boer said: "I began to realise more that it was time for something else.

"This is better for me and also for Ajax. What I will do, I don't know yet - a year without a club is also an option. I'll see what comes my way."

The Dutchman is seen as one of the top continental coaches having led Ajax to four consecutive Eredivisie titles prior to their recent disappointments.
You must log in or register to reply here.

Sports 2014 Retirements: Eleven Footballers We Will Not See On The Pitch Again