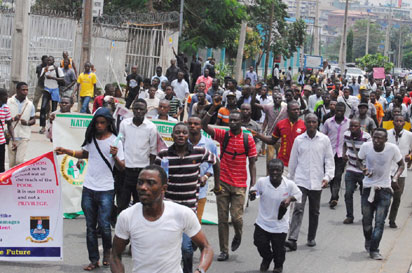 Grieved by the recent hike in the pump price of fuel from N86.50 to N145, the National Association of Nigeria Students, NANS, zone B, yesterday threatened to shutdown all tertiary institutions in the zone comprising 11 states today (Friday) in protest against the decision of the President Muhammadu Buhari led Federal Government to remove fuel subsidies.

NANS zone B in a communique it issued at the end of its meeting held on Tuesday at the Enugu State University of Science and Technology, ESUT main campus, decried that the hike in pump price of fuel has brought untold hardship on Nigerians. The students in the communique signed the Zone B Coordinator, Comrade Pedro Obi, the Assistant Secretary General in the zone, Comrade Jennifer Eze, and three others, said;

“The senate discussed extensively and exhaustively on the state of the economy, particularly the hardship unleashed on Nigerians courtesy of the obnoxious policy occasioned by the astronomical hike in the price of Premium Motor Spirit, PMS.

“In the past few months, the Federal Government has aided artificial scarcity of Premium Motor Spirit (PMS), subjecting the Nigerian masses to untold hardship from N86 and N 86.50 to N145.

“This no doubt, is an indictment on the Federal Government, a government that has failed to tell Nigerians the true position of things, a government where senior officials are dishing out counter statements in defence of the fuel price hike, defending the indefensible.

“NANS Zone B sympathizes with Nigerians on this unfortunate and sorry state of the Nigerian economy. NANS Zone B condemns in strong terms the manner in which the administration is managing the fuel crisis and unanimously rejects the conspiracy between the Federal Government and Independent Marketers of Premium Motor Spirit (PMS) in impoverishing Nigerians”.

“The Senate of NANS Zone B will close down all campuses in the eleven States of the Zone starting from Friday 27th May, 2016.”