Department of Petroleum Resources (DPR) has sealed not less than five petrol service stations in Osogbo, the capital of Osun State, for selling Premium Motor Spirit (PMS), also referred to as petrol, above the 145 Naira price band recently set by the Federal Government.

According to Channels Television, on the raid with the Nigeria Security and Civil Defence Corps (NSCDC) in Osun, the five fuel service stations were sealed for hoarding, gross under dispensing and selling above 145 Naira per litre.

In company of the Commandant of the NSCDC, Mr Ayodele Phillips and other officials, the team moved from one fuel station to another in Osun State to ascertain the level of compliance of the fuel station owners in the state to the directive and also to ensure that they are dispensing accurately. 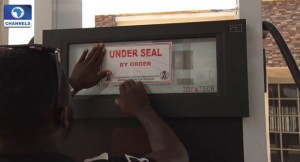 On arrival at another Oduwoye and Brothers fuel station at Igbona, the attendants had fled their duty posts but after a thorough search by the Civil Defence men, they were found hiding in the toilet.

The Commandant of the NSCDC said the check would be carried out regularly to regulate the PMS marketers and keep them in check.