According to Vanguard, the attack also left so many villagers with varying degrees of injuries while several others were still reported missing and unaccounted for.

According to a source, the armed men stormed the village in their numbers from neighbouring Tarka Local Government at about 11pm, shooting sporadically and burning down houses and huts in the community.

He said, “there is no doubt that it is this same group of herdsmen that have been terrorizing Tarka and Buruku Local Government Areas in recent times that are responsible for this attack.

“This time they stormed Tarfi village, Binnev Ward, in Buruku late last night at about 11pm, in a commando fashion shooting and killing anything that stood in their way", 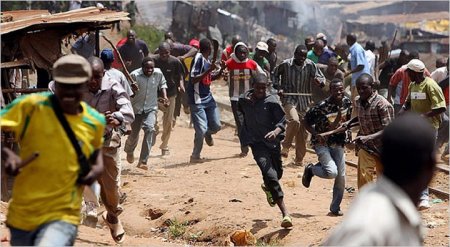 The Benue Police Public Relations Officer, PPRO, Assistant Superintendent, ASP, Moses Yamu, who confirmed the attack, said the Police recorded five deaths in the incident adding that the Command was on top of the situation. Yamu said, “yes I can confirm the attack on Tarfi village, Binnev Ward, in Buruku Local Government Area of the state by suspected Fulani herdsmen; so far we have record five deaths, two persons were killed in the village but three others who sustained injuries in the attack died on their way to the hospital.”

Fulani herdsmen have successful carried out several attack in Benue, Taraba states and so part of the South eastern Nigeria for the past few months, yet the President Muhamamdu Buhari administration is yet to bring down the perpetrator of such ugly incidents across the country
You must log in or register to reply here.