There is so far no sign that Gambia President, Yahya Jammeh, plans go any where on 19 January as he appears to be digging in. 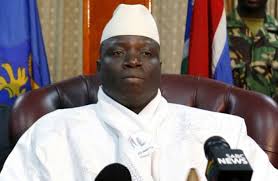 The latest action by his government was the closure of another private radio station Hilltop Radio, based in Banjul.

Recall that Teranga FM Radio was the first to be closed the the Gambian leader.

Jammeh, who seized power in a 1994 coup, initially conceded defeat to Barrow but then called for fresh elections, drawing condemnation from local opponents and foreign powers.

It was not immediately clear why the two stations were targeted by Jammeh, under whose 22-year authoritarian rule the media has come under regular attack, rights campaigners say.
Share:
Facebook Twitter Reddit WhatsApp Email Link
[1171]

None of my Business

Men who have been the head of State need generous pensions to facilitate their transition to civilian life. In order to encourage this, perhaps through the United Nations or some other International Body a monthly stipend should be paid to ex-leaders of developing countries so that they may retire from public life in comfort and with dignity.
Show hidden low quality content