Ekiti State Governor, Ayodele Fayose has counselled the people of Ghana to be mindful of making the same mistake made by Nigerians in the 2015 presidential election by voting for change.

Ghana will be going to the poll for a Presidential election on December 7, 2016.

Fayose said the change has brought hunger, sufferings and economic recession to the country, such that even the entire West African sub-region is being affected.

The Special Assistant to the Governor on Public Communications and New Media, Lere Olayinka, said in a statement issued in Ado-Ekiti on Sunday that Governor Fayose made the call while hosting some men of God from Ghana on Saturday.

The governor said, “Ghanaians should not succumb to the deceit of the opposition party that are calling for a change of government. Rather, they should return the incumbent President, John Mahama, who has no doubt done creditably well to deserve a re-election. 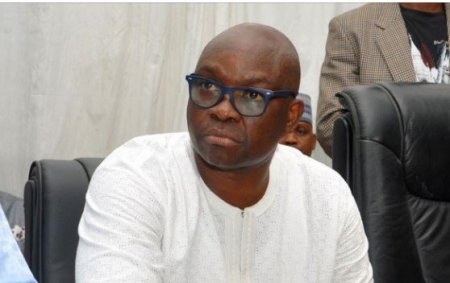 “Ghanaians should know that the change in Nigeria brought hunger, suffering, disregard for the rule of law as well as arrest and detention of Nigerians without trial and be mindful of those preaching change to them.

“Most importantly, the situation in Ghana at present is similar to that of Nigeria. Like President Mohammadu Buhari, opposition party, New Patriotic Party (NPP) candidate, Nana Akufo-Addo has contested the presidency two times. This is the third time he is contesting. He is also 74 year-old.

“In Nigeria, change is synonymous with economic recession that is even getting to the level of depression.