Curators
FREE Nigerian Business Directory
✅ NEW - get your business listed and your information shared across social media.
Ad
In a bid to supposedly prevent attacks from the spirit world resulting in bad luck, a young girl has been put through a rather bizarre ritual. 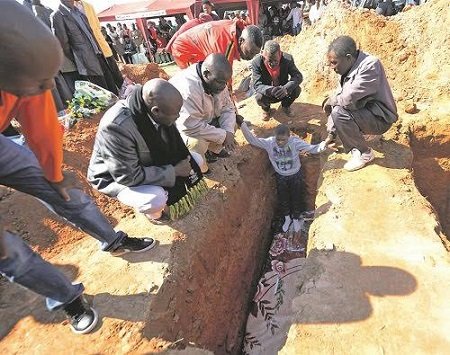 The11-year-old boy was allegedly killed by his father to please his stepmother recently but he was buried on May 19, in Kagiso, Mogale City, South Africa.

As tradition demands, the boy’s twin sister was lowered into the grave before and after his coffin was lowered.

According to the Daily Sun SA, traditional and community leader Sibangani Khanyile said this was done to prevent bad luck and death from following the living twin.

The boy’s sombre funeral was organised by community members as the whereabouts of their mother’s family is unknown. The community came out in large numbers to say their last goodbyes.

The boy was killed last Saturday and his body was found on Tuesday. His father has reportedly confessed to killing him. The father has been charged with murder and is still in police custody.
You must log in or register to reply here.