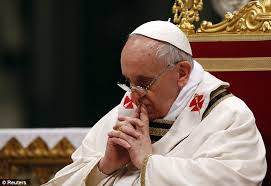 Pope Francis has asked God to “convert the hearts of those who sow death and destruction” following a series of deadly attacks by the Islamic State group (IS) in Syria.

The pontiff prayed during his weekly audience in St. Peter’s Square, where he supplicated for “eternal rest to the victims” and “consolation to their relatives” after suicide attacks in the regime’s coastal heartland that killed more than 150 people on Monday.

The pope said almost all the victims of the seven explosions targeting bus stations, hospitals and other civilian sites in the seaside cities of Jableh and Tartus were “unarmed civilians”. Eight of them were children.

More than 300 people were wounded in the attacks on strongholds of President Bashar al-Assad’s regime.

IS claimed the blasts in a statement, saying they were in retaliation for Syrian regime and Russian air strikes against jihadists.

My people, which do we subscribe to: the pope recommendation or the Indonesia treatment?

Sep 16, 2016
abujagirl
A
P
World 7 Things Every Nigerian Should Know About Mother Theresa

Dec 1, 2014
abujagirl
A
A
Metro Pope Francis, Kukah, and The Catholic Teaching On Corruption By Adeolu Ademoyo